The best way to install most things is with a package manager. This would be something like apt-get or yum for Linux distros, homebrew for Mac OS, and Chocolatey for Windows. Or you could go old school and download it here.

Go to the Extensions button (looks like a busted up square) or View > Extensions.

If the PowerShell extension doesn’t show up under the bombastic “RECOMMENDED” heading, just search for it in the “Search Extensions” field. Then install it.

Open up a PowerShell script of your choice. Then in the menu, go to View > Integrated Terminal. You should see the following. 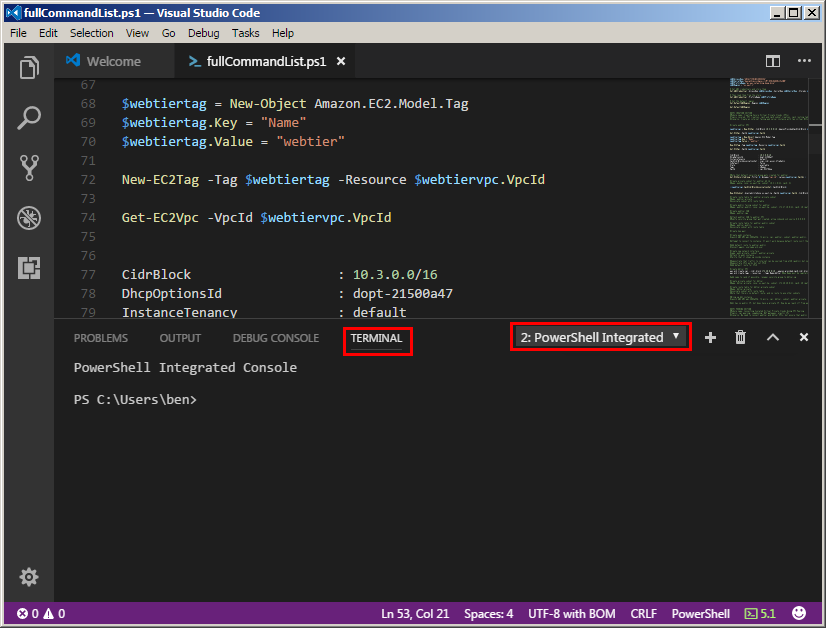 If you don’t see the PS prompt Make sure you select “TERMINAL” and “PowerShell Integrated” from the drop-down menu. 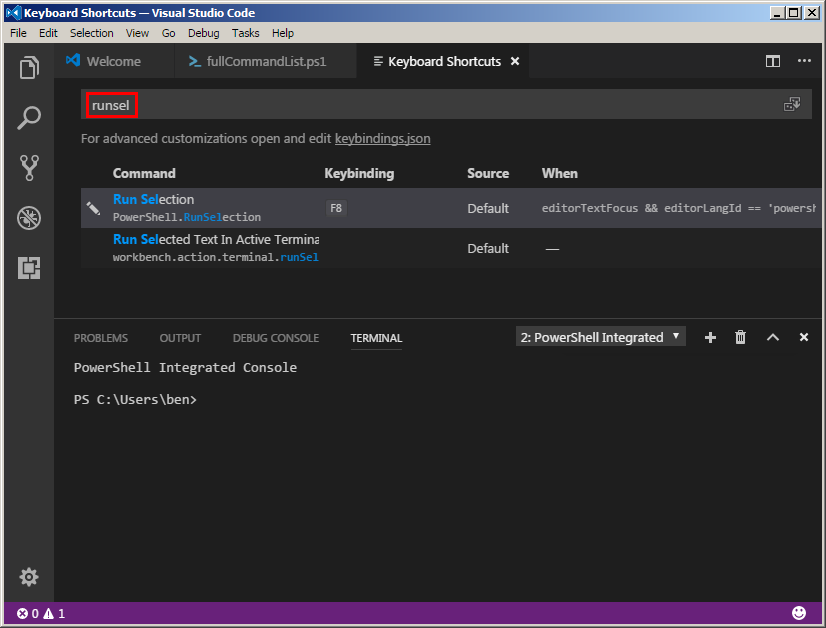 In the text entry field at the top, type “runsel”. You should see two items: 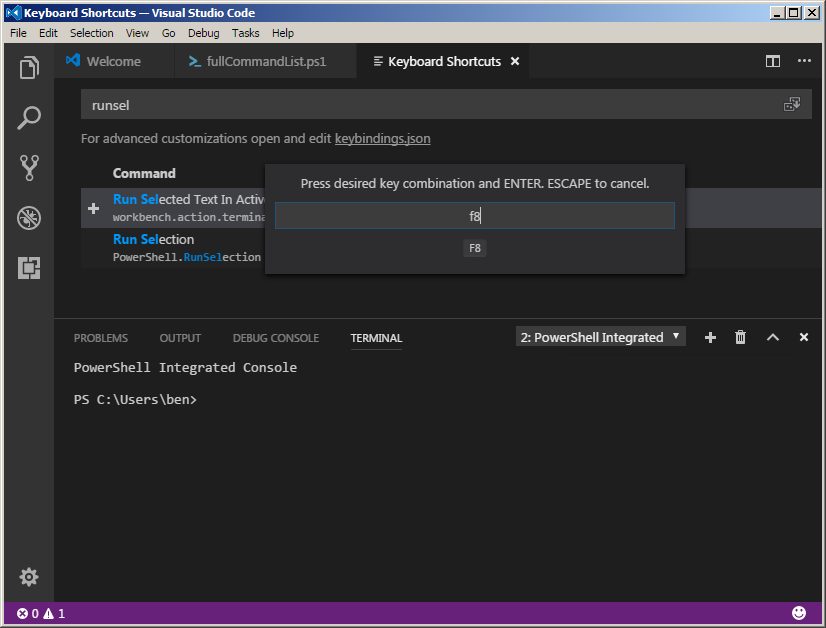 Depress the F8 key (or whatever you want to use) then hit Enter.

Go back to your code and select a block of code. Hit F8 and watch the magic! 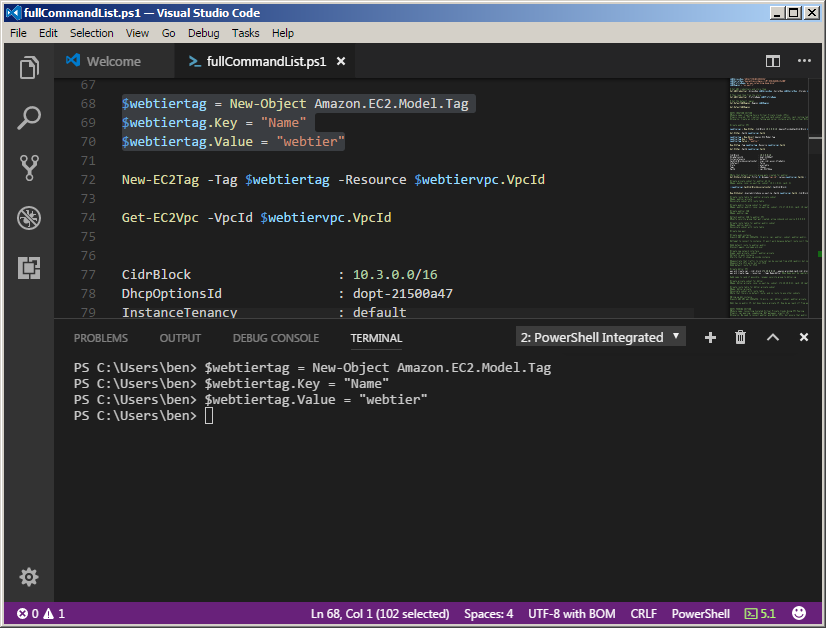 That’s what I’m talking about!

But… as of this writing, there’s an issue with this that’s being tracked on the vscode-powershell GitHub repo, and it’s this: multi-line input in the integrated console doesn’t work. That means you can’t select a function block, hit F8, and have it work. It will throw ugly errors in your face.

Recently I needed a way to copy a certificate file from within a PowerShell session to another Windows machine without opening a nested PowerShell session. But I ran into a little snag along the way: Copy-Item‘s dreaded Access is denied error.

I execute all of the following commands on NC1, the VM I’m remoted into.

And that error pretty much tells me what I need to do: use the New-PSDrive cmdlet!
$ New-PSDrive -Name H -PSProvider FileSystem -root \\hyperv1\c$ -Credential hyperv1\administrator
$ Copy-Item .\nccert.cer h:\
$ Remove-PSDrive -Name H

Ready to beef up your PowerShell skills? Get unlimited access to every course in Pluralsight’s online training library!

Sometimes you just need to create a file share.

With Windows Server Core, you don’t have all the old GUI tools that we’re all used to. So you have to make do with PowerShell and the old fake DOS prompt. Fortunately, with a little help, it’s pretty easy.

First, create the folder you want to share. In this case, c:\share

Next, modify the ACL to grant the DOMAIN\File Server Admins group full control

In many Citrix environments it’s common to have a large variety of ICA client versions. One thing that sometimes surprises users and IT folks alike is how much of a performance increase can be seen after upgrading an old ICA client. But how do you know which clients need upgrading?

The once-daunting and time-consuming task of copying and modifying applications for each server can now be done automatically in a matter of minutes!

Update: It’s even easier to undo the changes made by the above script if you decide you want to scrap the newly published apps and folders and start over. Just use the following script:

Let’s say you want to copy all currently published applications into a folder named “Test” in the console tree, while simultaneously modifying the new published apps with different permissions and client folder settings. Here’s how:

First, create the “Test” folder by hand (you can use New-XAFolder -FolderPath Applications\Test if you are so inclined), then use the following command to copy the applications into it:

Second, modify the published application properties to set the client folder (what folder the applications show up under in Program Neighborhood or Web Interface), and the permissions in one fell swoop. We’ll call the client folder “Test” and publish to the groups “domain1\citrix admins” and “domain2\Test Users”:

I ran into a little snag when executing some XenApp PowerShell commands. Certain commands like Get-XAFarm and Get-XAAdministrator would always give an “0x80060016” error. Here is an example and the fix:

Typically this error code in Citrix indicates a problem with IMA. But in this case it was even simpler than that: IMA couldn’t resolve the hostname of the database server hosting the data store. Make sure that the correct DNS suffixes are being applied so IMA can find the server, and if that fails, just add it to the hosts file and try again.

A common problem programmers have with CakePHP is saving related models with a many-to-many relationship, something Cake calls “hasAndBelongsToMany” or HABTM. One of the things that makes saving HABTM models so challenging is that when you go to save your models, Cake will act like everything saved fine when in fact only one of the models saved, or in some cases, none of them saved.

To illustrate how to overcome this common problem, let’s say you’ve just read Dr. Seuss’ Butter Battle Book. In the book, the Yooks eat their bread butter side up, and the Zooks eat it butter side down, and they’re always fighting about it. You decide to write a social network app to try to bring these two groups together.

Of course, as with any respectable social network, you’ll need a way to allow Zooks and Yooks to become friends. Since a Zook can have many Yook friends, and a Yook can have many Zook friends, This will require three models in a HABTM relatonship: Yooks, Zooks, and Yooks_Zooks to join the two models together (CakePHP orders the model names alphabetically, so Zooks_Yooks would not work).

Since Zooks and Yooks still don’t see eye-to-eye on the whole butter side orientation thing, you decide it will be necessary to write separate controllers for Zooks and Yooks. You start by creating the controller for Yooks.

In your first action, you want a Yook to be able to invite a Zook to the new social networking site. This will require creating a new account for the Zook on the fly, as well as linking it to the Yook’s account so the site knows they are friends.

Looking at it line-by-line, the first thing we do is initialize a new Zook. Next, we have to initialize a new ZooksYook, which as you recall is the model linking Zooks and Yooks. In our ZooksYook model, we only have three fields (you could have more, but for simplicity let’s stick with three): id, zook_id, and yook_id. Since this controller is for the Yook, his user id will go into the yook_id field of the new row we want Cake to create for us in the database. That is easy enough.

The above is a unique use case for HABTM, and it is certainly not always necessary to do it the way I just showed you. Other ways of accomplishing the same thing are out there, but they didn’t neatly fit into my existing code so I experimented until I got something different that worked. Enjoy!

Need help? Have a question or comment? Check out the forums!